We are giving you the run down of why you should stop the swiping and try the better way to date. 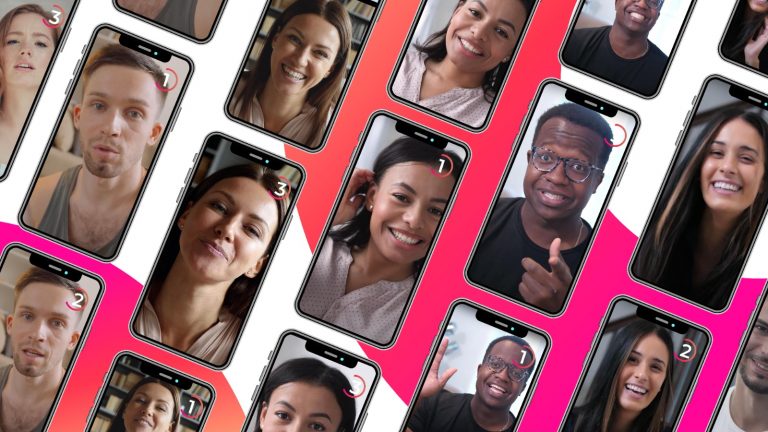 For many, when you think of the terms ‘video’ and ‘dating’ you are stuck picturing these awkward guys from the 90s, balancing uncomfortably on a less-than-stable stool while they record an intro VHS to a portfolio of eligible (or so they’re told) women. If they don’t head back in 4-6 weeks, tough luck.

Thankfully, that’s not what modern-day video is. Instead, we’re at an age where sending 4K video across the planet is easier than cooking an at-home pizza (why do I keep burning it?!).

Now, throw in a dash of pandemic, a rapidly evolving mindset, and voila: video and dating don’t seem all that scary.

However, we get it: changing habits and behavioural traits are incredibly difficult, so it’s going to take time. If only there was an easier way…

At our Video Speed Dating Events, a number of like-minded singles in under an hour. How are they like-minded, you ask? Well, they’re in the same event for one!

These people are here to meet and make meaningful connections. There’s no cut and paste responses, generic chat up lines, or forced ‘banter’. Instead, every conversation has the potential to be compelling and unique, with no two being the same. Plus, there’s that fun feeling of meeting someone you’ve never seen before!

Now, if you’re still not convinced, have a read over the next four points and see if we can’t get you to open up a little!

Despite 10+ years of dating apps, and 20+ years of online dating, we still crave the basic desire of a lingering stare. Locking eyes with your future partner in a crowded gig, a busy bar, or perhaps even just a planned get together has…well..something just oh so organic about it.

Thing is, times are a-changin (and have been for some time). Be it an uneasiness still felt by many as they try to return to an in-person event, or something so sad as a need for heightened awareness on a night out, modern love is quite a bit different.

Nevertheless, there is hope. Isodate video speed dating restores much of the power of eye contact and body language (unless you’re someone who is using a potato as their camera) and lets you be so much more than just a profile. Plus, science backs us too: engaging in eye contact and hearing a human voice releases the love chemical, oxytocin… it’s why, deep down, we know that swiping has never felt…well..natural.

After all, isn’t it about time that technology and humanity really started to work together?

Honestly, this one might seem trivial, but it really isn’t.

Let’s admit it: it’s been a tough year. We’ve become lazy with our appearance, with many of us using the pandemic to justify a general lack of effort. I understand: the thought of wearing pants with an un-elasticated waist fills us with a strange mix of dread and confusion – but how about if there was a happy medium? A first true way to really dress with a smart casual vibe? Well then: video speed dating is perfect for you.

With our real time video platform, you can be as strategic as you want when dating from home. Only show off what you want to show off – so that means a nice shirt or blouse on top, and some comfortable sweatpants and flip flops below the screen. It’s dating as it’s meant to be: casual, relaxed, but still with enough effort to make an impression.

Don’t be something you’re not – it’s only going to end badly.

A study conducted by Cornell University concluded that as many as 80% of Online Dating Americans had lied on their profile. Now this could be anything: height, weight, how charismatic you actually are – the list goes on, and it sells the same story: people feel the need to ‘reimagine’ or present this ‘unrealistic expectation’ so as not to be swiped left.

Readers: it’s 2021. Self confidence is an extremely sought after quality, because let’s face it: it’s not that common any more! Isodate allow every user 3-4 minutes to really get to know someone, and trust us: if you don’t get on in this time, it wasn’t meant to be.

Still trying to convince yourself that all that swiping is going to work out ‘this time?’ That ‘tinderella’ is just around a swipe away? Well, allow me to offer some less-than-encouraging insights here:

Virtual Speed dating is different. There’s no need to sit and sift through your photo gallery for a dating profile; no need to rack your brain for the wittiest chat up lines or overthink how you punctuate your opening line. In fact, the only thing you really need to think about is the lighting in your apartment.

On average, 92% of Isodaters end their events with at least one or more matches, so you’ve got more time to get to know each other, and less time for that damn swipe fatigue.